MXstore is pleased to announce we are proudly supporting DV Free, a dedicated charity that aims to help victims of domestic violence. Stephanie Bofinger, a former professional swimming athlete from Germany, started the DV Free charity after experiencing domestic violence first-hand. Stephanie ended her 17-year marriage in 2009 after years of emotional and verbal abuse which still continues to this day.

Stephanie made a promise to herself that once her son turned 18, she would celebrate that last remaining tie to her husband coming to an end. In August 2018 Stephanie will jump on her motorbike and start her 2 Stage tour (lasting 3-4 months) of Australia raising awareness (see below). When she gets back, it won't be long before she's back out there again and plans to spend the majority of 2019 traveling around Australia to continue spreading awareness for this worthy cause.

In 2020 Stephanie will then embark on a world tour with her son to countries that have a high rate of domestic violence and is considered acceptable within their society. Stephanie, through her own personal journey, found her passion in empowering others to find their own inner strength, resilience, love, and compassion to overcome life's obstacles including those that disempower victims of violence from seeking help.

Stephanie and son Josh training and practicing for the journey they will embark on together in 2020.

After Stephanie's divorce, she embarked on a journey of personal development and self-discovery. It was during this she discovered Neuro-Linguistic Programming (NLP), which then lead her to an interest in human behavior and psychology, which she is now close to finishing a bachelor's degree in. In 2017, after yet another court case, Stephanie decided to get involved in helping other victims of domestic violence and became an ambassador for End all Domestic Violence Limited.

It was during her time here she started to notice a very large gap in the help available for people going through emotional abuse. A lot of people aren't at the end of the crisis spectrum where they experience physical harm or life-threatening abuse, yet the assistance available mostly caters for this end. Emotional abuse is consuming and often causes severe depression and suicidalness in victims, yet often it isn't taken as seriously as physical abuse because the evidence isn't as obvious. It was through working with other charities and raising her profile within the community that DV Free was born.

Stephanies love for motorbike riding came much later in life. "I always thought motorbike riding had an element of freedom attached, so I decided in September 2016 to learn how to ride a motorbike and haven’t looked back since then. I couldn’t believe how much freedom I was able to gain. When riding my motorbike, I feel free from all my worries and fears that are in my daily life (e.g. abusive ex-husband, children, parents, finances, animals etc.), because at the time of riding it is just me, the road, other vehicles and the wind around my ears."

Our very own Geoff Ballard helping Stephanie plan her journey.

Stephanie soon realized how passionate she was about riding, and as such, got involved as much as she could to learn more about it. She did more advance on/off road training, attended maintenance workshops, and even took a part-time job in motorbike riding school. In the last 16 months, she has completed close to 40,000kms on her bike! Stephanie wants to show others that you can find passion and freedom even when you have had an experience with domestic violence.

In August 2018, Stephanie will embark on a 3-4 month motorcycle journey throughout rural QLD, NSW, and SA to promote the prevention of domestic violence by creating social change. Stephanie wants to raise awareness of the controlling behaviors that are harmful and abusive to human beings, in particular, the physical, emotional and sexual abuse relating to both men and women, plus the effects of this on the communities in which they reside.Through her DV Free charity, Stephanie will provide a platform for hope and healing through education, collaboration, and inspiration for both men and women. Stephanie say's "it's not just women who suffer at the hands of domestic violence - men can also be the vistims too".

The trip will happen in 2 stages - see below for maps and details of Stephanie's tour. 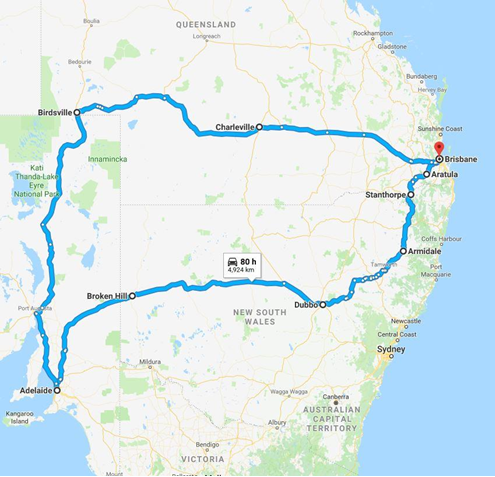 Stephanie has already organised her first charity luncheon to be held on the 6th July at the St. Lucia Hillstone Golf Links (Brisbane), starts at 11.30-3pm. Click here to organise a ticket!

We're behind Stephanie every step of the way as she makes this remarkable journey through rural parts of Australia to help others experiencing domestic violence. If you'd like to get involved in this amazing cause through volunteering or donation, head over to the DV Free website for more information, show your support and stay tuned to see updates and video logs of Stephanies journey along the way.